On Saturday, March 14th, Abhayagiri will be live streaming our evening pūjā and Dhamma talk beginning at 7pm. Ajahn Pasanno, Abhayagiri’s guiding elder, has offered to share his reflections that evening. The live stream is an opportunity to practice chanting, do formal meditation and listen to a Dhamma talk along with the Abhayagiri community.

You can join the live stream here: https://youtu.be/3QOXgh3dMXU

We had previously posted that Venerable Bhikkhu Bodhi would be giving a talk this Saturday, but we have had to retract that announcement due to unforseen circumstances. We apologize for any confusion regarding this new announcement. 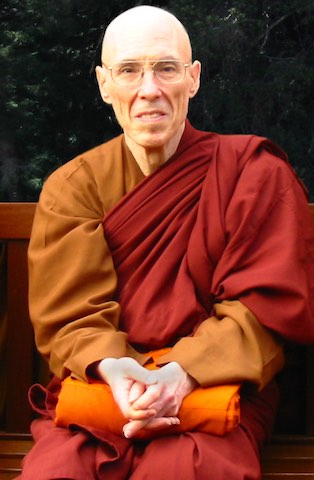 Abhayagiri will still hold regular evening puja and share a Dhamma talk on Saturday, March 14th, 2020. There will be a live stream of this event. For details, please see the following announcement:

Ajahn Pasanno and Ajahn Nyaniko spent about three weeks in Thailand, returning to Abhayagiri on January 7th. Ajahn Pasanno offered many teachings during that time. Here is a video of a Dhamma talk and Question and Answer Session in English, titled Language of Dhamma. These teachings were offered at the Buddhadāsa Indapañño Archives in Bangkok on December 21st, 2019. 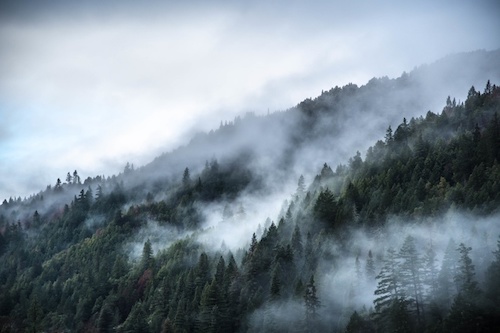 During these three months there will be no overnight guests accepted. (For overnight visits after the retreat please contact the monastery on April 1st.) However, day visitors and those wishing to visit the monastery to participate in the meal offering or bring offerings of requisites at the meal time are still welcome. It should be noted, however, that the community is practicing noble silence, and talking and conversations with the monastics and retreat crew are very limited.

As per usual, the general public is welcome to join us for the evening meditation and Dhamma talk on Saturday and on the Lunar Observance Day. Furthermore, for those interested in listening to or downloading Dhamma talks from the monastery website, we plan on posting new talks regularly throughout the retreat. 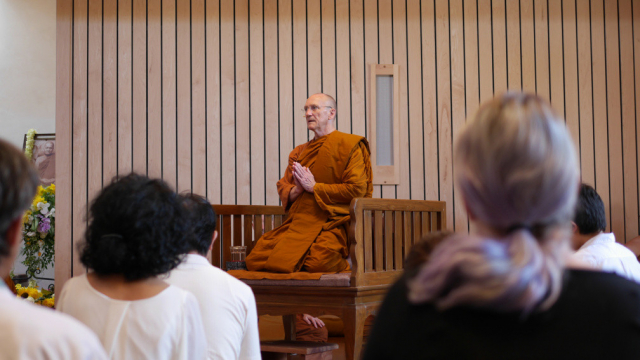 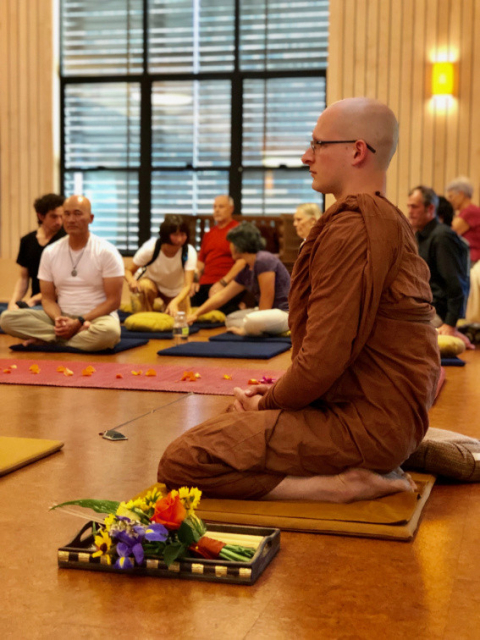 2019 saw much development of the monastery infrastructure. In addition to repainting parts of the main cloister area and constructing and installing replacement bridges on our loop trail, various major projects were undertaken. 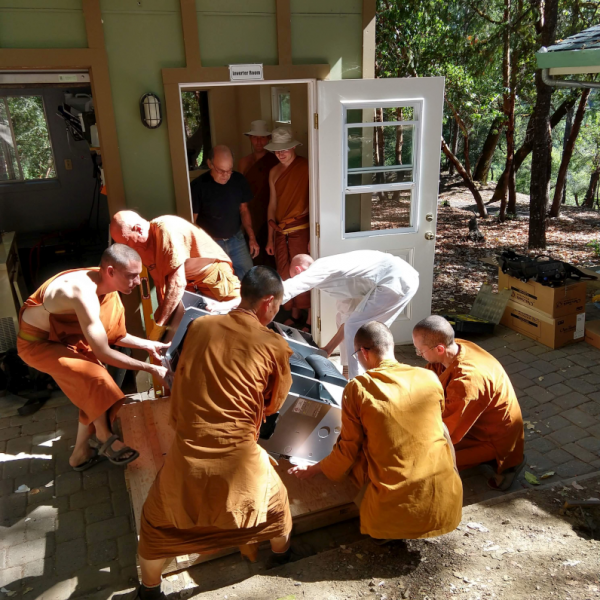 One of the most significant monastery infrastructure developments this year was an upgrade to the off-grid solar system in the upper part of the monastery. The batteries were replaced, a larger new inverter was installed and finally in November, the last major phase of this year’s upgrade was completed with the installation of 12 new solar panels.

This solar system meets several purposes of the monastery. The upper part of the monastery is not connected to the PG & E electrical grid and connecting it would be a significant and expensive undertaking. This robust off-grid solar electricity system is especially helpful in light of the electricity blackouts that Abhayagiri and others in northern California experienced this year and that may continue in the future. Furthermore, the use of active solar energy reduces carbon emissions, which is an act of compassion for current and future generations.

Since 2017, when fires in Redwood Valley reached the monastery boundary and forced the community to evacuate, Abhayagiri has been making concerted efforts to increase its fire safety. At the end of 2018, new signage was put in place throughout the monastery, as per the guidance of the California Department of Forestry and Fire Protection (CAL FIRE). The signs provide numbers and directions to the various buildings and have been installed to help firefighters in the event of a fire.

During this past year, two local tree service companies have also been brought on to increase Abhayagiri’s fire safety. This work has been facilitated through donations to the Fire Prevention and Trail Maintenance Fund. These local companies have cleared underbrush along the main road that runs through the monastery, the internal roads on the women’s side of our property, as well as the area of the monastery that borders Tomki Road. A shaded fuel break was created along these internal roads, reducing fuel for 25 feet on each side of the road, removing dead trees, smaller trees and overgrown brush. Fire clearance was also performed in a 50-foot radius around our water storage tanks. Not only will this hold us in good stead in the case of a fire, it is also helpful for the trees and land, providing space and a clearing and cleaning out of the dead and overgrown trees and brush. Tan Pesalo coordinated the new signs, the work by these local companies, as well as various other fire safety projects at Abhayagiri, such as the purchase of a large amount of fire equipment. The new fire equipment, which was made possible through one generous donation, includes new fire hoses, weather-proof fire hose boxes, fire fighting equipment such as rhinos, mcleods, and backpack fire fighting pumps, as well as new valves for the fire hydrants around the monastery.

Upgrades to the Workshop
The workshop received multiple upgrades this past year. Ajahn Nyaniko completed improvements to the dust collection system, including moving the dust collector to a room outside the workshop and adding acoustic foam panels to the inside of that room, making the workshop itself much more quiet and peaceful. Ajahn Nyaniko also built a concrete fuel bunker on the north edge of the workshop, with help from Tan Suddhiko. The fuel bunker will increase fire safety by allowing us to store fuel in a concrete, fire resistant enclosure. The fuel bunker was completed with an impressive steel door, welded by resident welder monks. Also, during the spring, there was an extensive reorganization to the Upper Workshop. 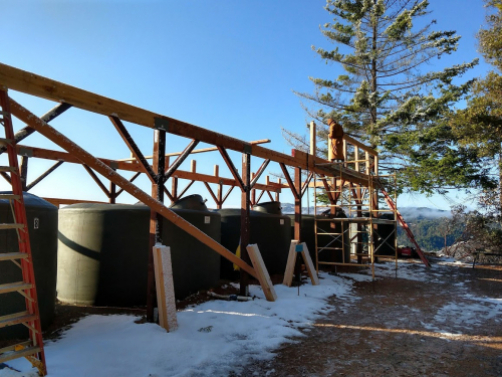 The large work project of the year was the construction of a protective shade structure for the water tanks on the ridge. These water tanks can hold a total of more than 20,000 gallons of water. Having such a large reserve of water is helpful to have in case of a fire, as well as for meeting the ongoing needs of the monastery. As part of that project, the existing tanks are being replaced, as they have deteriorated over time and were damaged in the 2017 fires. Ajahn Sek, Ajahn Nyaniko, and other bhikkhus and novices have been working to build the 56’x18’ structure. The frame is mostly up, and the project will likely be finished in the spring of 2020.

Exploration of Chedi Site
The monastics and guests of Abhayagiri continued work on the trail to the planned chedi site near the ridge and are currently exploring how and if a road for vehicle access might be built to reach it. The chedi is intended to be a sacred place and an object of reverence and can be a depository for sacred objects. Chedis are common throughout Thailand and much of southeast Asia.

Preparing for the Winter Retreat

With January 1st fast approaching, the community is wrapping up loose ends and preparing for the Winter Retreat. During the months of January, February and March there will be more emphasis placed on formal meditation and study. The communal work has both provided opportunities for cultivating positive spiritual qualities as well as set the stage for the benefits of formal meditation to be developed. 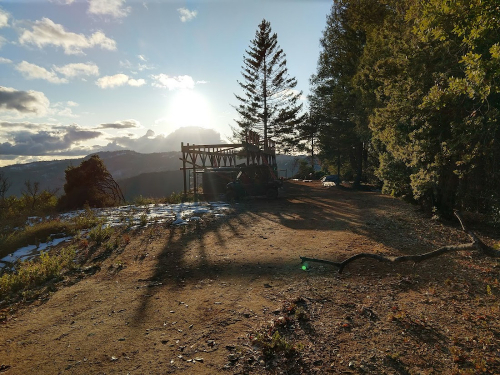 We hope you can join us at Abhayagiri Buddhist Monastery for the next Upasika Day on Sunday, December 1, 2019, a day of community, Dhamma study, meditation, and renewal.

Please note that with the end of daylight savings time, we will take refuges and precepts at 10:30, and the meal offering is at 10:45 sharp.

Our theme and topic for the day will be “Meditation: Developing Skill In Reflective Meditation.” Luang Por Pasanno, Ajahn Karunadhammo and Ajahn Nyaniko have graciously agreed to lead us in an exploration of the Buddha’s teachings on bringing a specific theme into the mind for reflection during meditation, including choosing and developing fruitful themes and the benefits of this skill.

If you are so inclined, please read in advance:

We hope you will also join us for the daily meal, beginning at 1o:45 a.m. It’s customary to bring a dish to offer to the monastics and to share with others. Our material support of the monastery community is an important aspect of our role as upasikas (literally, “those who sit close by”), and our generous offerings of food are a tangible means of extending this support.

Attendance at Upasika Days is open both to those who wish to make a formal commitment to the program and to those who simply wish to attend for the day. All are welcome. Please spread the word among those who may be interested.

The schedule for the day is as follows:

For directions on getting to the monastery, please visit www.abhayagiri.org. And if you’d like to carpool, please feel free to
utilize the “upasika@yahoogroups.com” email group as a means of contacting others planning to attend.

To enhance individual practice and increase self-discipline through making a formal commitment to spiritual training.
To deepen both the intellectual and experiential understanding of the Dhamma.
To have more supportive contact with like-minded people and the ordained Sangha.
To be better equipped to communicate the Teachings to others.

Undertake to live by the Three Refuges and the Five Precepts, with the Theravada Forest Tradition as the focus of one’s practice.
Attend regular gatherings with other Upasikas, either at the Monastery or in your own homes.
Visit the Monastery and formally take the Refuges and Precepts at least quarterly.
Observe the Uposatha Days of the full and new moon in some fashion appropriate to your living situation.
Practice meditation daily.
Find some time each year to go on retreat.
*Attend at least one festival day or communal gathering at the Monastery each year.