During Ajahn Sumedho’s stay, Rik Center was at the monastery contemplating how to support the monastery with an anniversary birthday project. A number of friends of Abhayagiri who were “born on a four” (born in 1954, 1964, 1974, etc.) were interested to continue the success of the previous year’s project. Despite the enthusiasm of the “born on a four” crew, nobody knew what a suitable project would be.

Then one day, while taking with Dennis Crean in the cloister area, Rik looked up the hill to the outdoor Buddha rupa area. He reflected on how rarely he goes up there and recognizing there were steps from the driveway that went up and lead to nowhere. Standing below the hill no one could tell or even see the other trail that goes around from the side. Plus, even if one was able to finally find their way up to the Buddha there was nowhere to sit. Rik recognized in himself there was a lonely and desolate feeling of separation from the beautiful Buddha that was so close and yet so far.

He saw the possibility of steps that would continue on from the first steps leading up from the driveway. Rik imagined benches that would make it easier to sit by the Buddha and look out over the monastery grounds. He was imagining not just the view of the current cloister area, but also the view of the future reception hall and outdoor deck. He further considered that some landscaping and plants would brighten up the area on the hill and having some colorful flowers on a sconce hanging from the poles on the Buddha’s shelter would raise our eyes and mind up towards the Buddha. After sharing these thoughts with Dennis and conferring with Ajahn Pasanno, the project was a go!

After a bit more organizational work, some online shopping, and some help from “Cody” our neighbor and heavy equipment operator, the transformation began. The “born on the four’s” provided the primary funding and put all the pieces into place to create our new Buddha rupa hill area. Those from the group who were available came together at the end of September to finish up the project. On Sunday, September 28th the “born on the four’s” put the benches together, raked the stones and celebrated their birthdays with a meal at the monastery including a lovely Red Velvet birthday cake.

The following day, under the guidance of Betsy Blessing and Rik who had been out shopping all morning at the local nurseries, new foliage and one hundred flower bulbs were planted into the ground with the help of the monastic community. In addition, funding from the Buddhist Bicycle Pilgrims supported two new outdoor benches. Led by the Born on the Four Group and with help of many hands, the new Buddha Rupa area was ready in time for the 2014 Kathina Festival. The space is a welcome addition to the cloister and it continues to be available for use by all visitors.

Many blessings to the generosity of our Sangha and how we all turn the wheel of awakening together.

For a photo gallery illustrating the transformation, click on the link below. 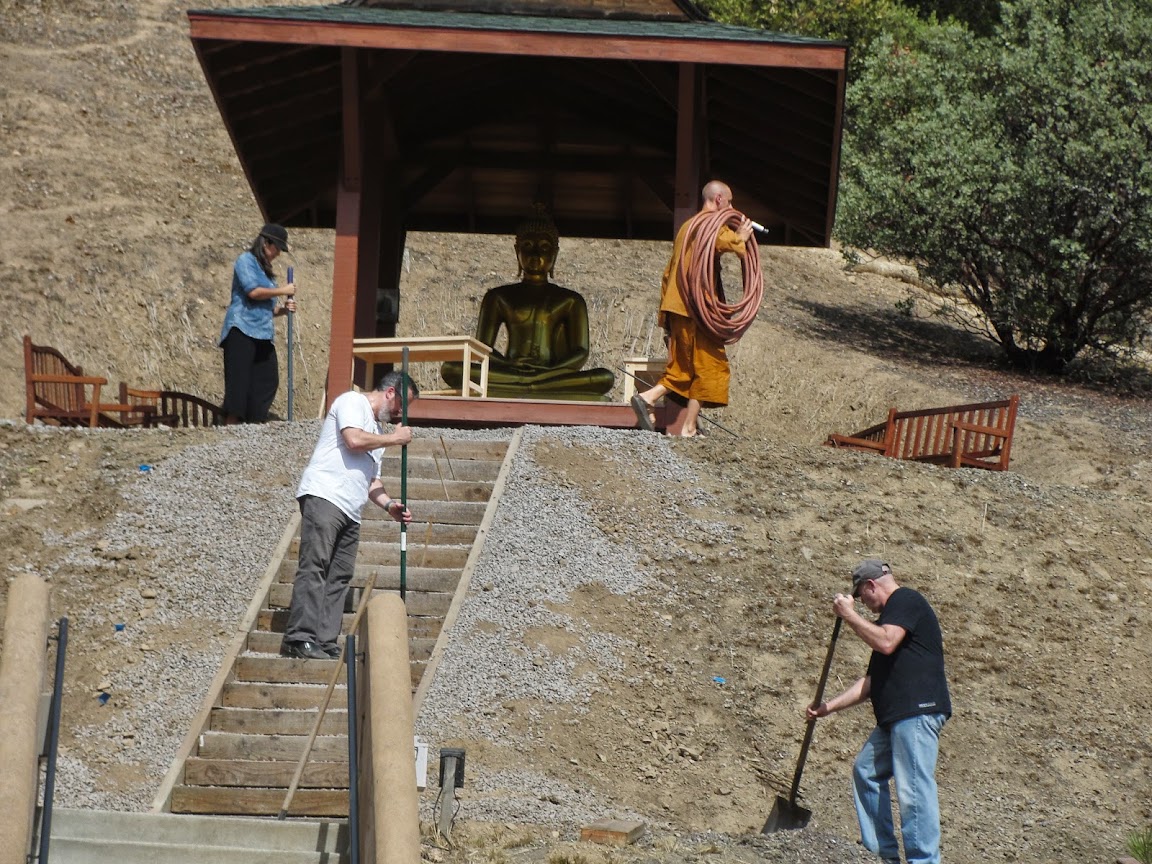 Born On a Four Photo Gallery

The participants in the Born On a Four Project are: