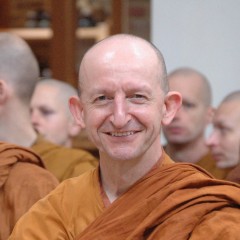 Join us in welcoming one of Abhayagiri’s founding abbots this month. Ajahn Amaro, co-abbot of Abhayagiri from 1996 to 2010 and current abbot of Amaravati Monastery in England, will arrive at arrive at the monasteryi late on October 25 and fly out of the Bay Area on November 8. Details regarding his teaching engagements and general schedule can be found below and on the Abhayagiri calendar