Recently I’ve been reflecting on the ways we project ourselves to the world, and the relief that comes when we set these projections down. Many of us feel the need to constantly create a persona based on either how we think we should be, or how we want others to view us. If we can get an idea of how that process occurs, then we have the potential to catch it in its tracks. By noticing this fabrication before it becomes too involved or too set in, we’re able to use reflection to let it deconstruct. The less we try to create a sense of who we are, or who we want people to see us as, then the more natural and at ease we can be.

Earlier I suggested seeing if walking meditation could be used as a reflection—walking back and forth with the thought in mind, I don’t have to be anybody right now. By doing this for a short period of time, we are planting the seed that may help us stop creating an identity to present to the world. Instead of forming that identity, we simply see, if even for a finger snap, what it’s like to no longer create that image in our minds.

When there is a period where we don’t need to think too hard—moving from one place to another in a moment of transition or simply getting up to go to the bathroom during the work period—whatever mundane activity it may be, we can notice this. We can ask ourselves, Can I drop this created image of being somebody who’s operating in the world? Could I at least notice whether or not I’m holding this perception of a person who behaves in a certain way—with a role, a purpose, an image or projection of a solid independent individual? Then try to let go of that created self-image for just a moment, see what it might feel like. Feel the sense of relief and ease that arises when it’s simply a few body parts and a few stray thoughts moving through space and time.

This reflection is from the newly released two part collection of Dhamma Reflections: 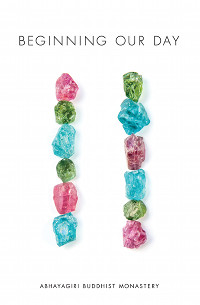