Nestled in the Columbia River Gorge along a forested stretch of White Salmon’s Jewett Creek is the home of a small group of Theravada Buddhist monks. The Pacific Hermitage is a branch of Abhayagiri Buddhist Monastery in Redwood Valley, California. 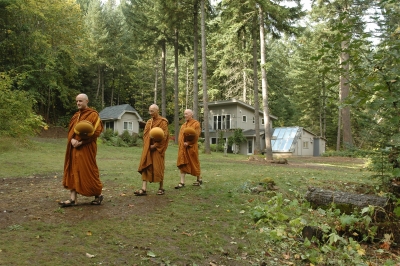 Established in the summer of 2010, the Hermitage is a place of solitude for these monks, who devote their lives to meditation and simple living. The monks walk daily through the town of White Salmon to accept donations of food, and are available to the community as a spiritual resource. They also teach and lead Buddhist meditation weekly in White Salmon and intermittently in other parts of the Northwest, including Portland, OR.

Ajahn Sudanto is currently the abbot of Pacific Hermitage. Born in Portland, Oregon in 1968, Ajahn Sudanto became interested in Buddhism and Indian spiritual traditions while completing a Bachelor of Fine Arts from the University of Oregon. After graduation, he set off for an open-ended period of travel and spiritual seeking in India and Southeast Asia. After a year of traveling, he proceeded to Thailand to begin a period of intensive study and meditation, which drew him to Wat Pah Nanachat in the Northeast of Thailand. There he met Ajahn Pasanno (then the abbot) and requested to ordain and train with the resident community, taking full ordination as a bhikkhu in 1994. After training for five years at Wat Pah Nanachat and various branch monasteries in the Ajahn Chah tradition, he came to Abhayagiri to live and train with the emerging sangha in America. As of July 11th, 2010 Ajahn Sudanto has resided at the Pacific Hermitage.

To see which Abhayagiri community members are currently staying at the Hermitage, visit our community page.