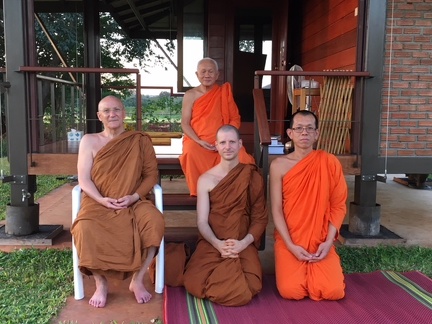 After completing five years of monastic training as a monk under the supervision of one’s home monastery, a monk is thereafter referred to as a majjhima “middle”, denoting the period when one has at least five vassa but less than ten. Majjhima monks will often take the opportunity to practice in other environments. In 2014, after his fifth Rains Retreat as a monk, Tan Kovilo asked permission from Luang Por Pasanno to explore life and training in Thailand. On the plane to Thailand, Tan Kovilo aspired to three goals for his time in Thailand: become fluent in the Thai language, take the opportunity to serve as an attendant to respected senior monks, and make a point to try to be of service to Ajahn Kevali (abbot of Wat Nanachat), Ajahn Siripanyo (abbot of Wat Dao Dum), and the other senior monks in our tradition in Thailand. Upon enthusiastically telling Luang Por Pasanno about his plans, Luang Por chuckled and said, “and goal number 4: learn how to meditate!”

With the help of many Thai and European monk friends, T. Kovilo has made progress in his Thai Language study, including passing the three levels of the basic Dhamma exams (Nak Tham) in Thai. One highlight of Tan Kovilo’s time in Thailand was the opportunity to live for many months with Luang Por Piak - one of Luang Por Chah’s senior disciples and abbot of Wat Fakram in Pathumthani, Thailand. Tan Kovilo also spent time at Wat Pah Nanachat, the International Forest Monastery for Westerners, supporting Ajahn Kevali and the local community. In addition to trying to be of service at Wat Nanachat, Tan Kovilo is also grateful for having the opportunity to serve as editor-and-chief in the production of Ajahn Jayasaro’s biography of Luang Por Chah, “Stillness Flowing.” The year-plus working on that project, living alone in a small hut in close proximity with Ajahn Jayasaro, was one of the best years of his life.

As for goal number 4 … it is still in process.

After spending one year in America, predominantly at Abhayagiri and the Pacific Hermitage, Tan Kovilo will be returning to Thailand this July, this time to stay at the Thai branch monastery of the Burmese meditation master Pa Auk Sayadaw.