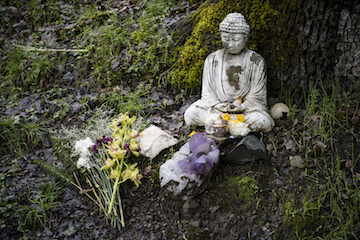 The flowers lining Abhayagiri’s trails opened almost overnight. As late March’s sun burnt off the mountain fog, blue bells of hound’s tongue and red tufts of indian paintbrush began to appear along the monks’ walk to and from the cloister, where they’d spent the previous three months practicing in silence. The end of winter retreat meant a return to a regular routine of working in the forest, caring for monastery buildings, and receiving guests. It meant fifty emails in the guest monk’s inbox from people hoping to visit. It meant a chance for the community to carry the benefits of silent practice into interaction with the world, and the honks of geese migrating north in the evenings. It meant spring.

From January until the end of March, Abhayagiri’s community withdrew from its usual duties and joined together in a schedule of formal meditation and silence. Such annual retreat represents a hallmark of the Buddhist tradition, which encourages its monastics to put forth a special effort in formal practice for three months every year while staying in one location. While this retreat traditionally occurs during the Indian monsoon, many Western monasteries use the winter months to pursue a similar ethic of practice. Weeks of full schedule, during which the community sits together in the meditation hall for sessions beginning at five am and finishing at eight pm, alternate with more open periods during which individuals have the opportunity to determine their own routine. Daily readings, Dhamma discussion, and an atmosphere of noble silence help support the internal work.

The quiet both catalyzes internal struggles and helps individuals in confronting them. One monk reflects, “Even if one is going through difficulties, either internally or with the schedule, when you have a large group of people keeping the basic attitude of the practice, the external environment helps support the introspective and calming internal environment, so you can process difficulties more easily even if it’s seemingly very turbulent.”

Even during periods when such intense practice proves difficult, members of the community understand it as an extraordinary gift, giving thanks particularly to the the winter retreat crew, who spend the winter months supporting and practicing alongside the monastics. Saying goodbye to such close friends represents one of the more poignant moments of the new year.

Frequently, monks finishing the annual retreat embark on the traditional monastic practice of wandering tudong, or pilgrimage. In previous years, monks have walked for weeks up the Pacific Coast, travelled down through the south of California, and even meandered along the curves of the Mississippi. One monastic explained the challenges of such practice in a country where Buddhism is just becoming established:

“As monastics, we don’t use money, can’t ask for food, can’t ask for lodgings, and can’t store food, so every day we have to go to an inhabited area and hope people feed us. One of the major practices of tudong is to give yourself over to the faith and generosity of perfect strangers. You’re depending on people noticing you, asking what the heck you’re doing, why you’re doing it, being inspired by that, and giving you some meager sustenance for the day. You’re throwing yourself into situations that are not in your comfort zone, and food, water, and your day-to-day experiences are unplanned and uncertain.”

On April 3rd, two Abhayagiri monks decided to shake off the inertia of the just-finished retreat by following the Buddha’s ancient footsteps into the country. In this case, they determined to walk an eighty-mile stretch of road from Windsor back up to Abhayagiri. One of the pair described the benefits he hoped to gain from their ten-day pilgrimage:

“Quite a lot of the monastic form is about having a degree of certainty regarding your schedule, who you’re practicing with, what food you’re getting, and you learn a lot from living within that structure. But going into an unstructured environment on a walk-about or tudong is another classroom — it provides different opportunities for learning. Going from a settled, highly-structured community straight into an environment where you’re living close to the elements and are uncertain about food provides a stark contrast, and it’s always in transitions and contrasts that we stand to learn the most. Hopefully, my practice on retreat is such that I will reap the benefits of that when living in a chaotic environment, and if I’m practicing correctly, the lessons learned and qualities developed during an uncertain journey will transfer back as benefits within a structured environment.”

At the monastery, others determined to walk into a more profound unknown. Two laymen who stayed with the community for the past few months decided to ordain as anagārikas, or white-robed monastic postulants. The ceremony, which will take place on April 27th, represents one of the most significant moments in a spiritual aspirant’s life. One of the postulants, Josh Dultz, will be taking on white for his second time after several years away from the monastery. “It just feels right,” he laughed, “It feels like jumping into an abyss, but a very trustworthy abyss.”

Apart from the potential for two new sprigs of white, the new year brought other changes. Having searched for a residence for aging monks over the past few years, Abhayagiri recently acquired a property directly across Tomki Road. The land of a long-time supporter, the purchase included a house, kuti, and pond, all situated in a grove of redwoods a two-minute walk from the monastery entrance. The property will serve as an important future home for elderly monks from Abhayagiri and elsewhere.

While the property’s appearance seemed a gift in its own right, the blessing quickly grew. Almost immediately after deciding to buy the property, the monastery learned that an anonymous donor wished to cover the entire cost of the purchase. In a matter of weeks, Abhayagiri was granted a boon it hadn’t imagined just a month before: an eventual home for its elders. The generosity served as a powerful reminder of the goodness that comes to places of practice and helped the community remember that they must work sincerely to be worthy of such gifts.

Luang Por Pasanno’s coming return to the monatery in July represents another piece of bright news. Having entered the second half of his year-long sabbatical in Canada, Abhayagiri’s former abbot enjoyed his first Canadian winter in over forty years, despite one encounter with a moose. Debbie Stamp, Abhayagiri’s steward, reflected on his absence and coming return:

“The co-abbots are learning a lot. We have the foundation Luang Por set for us, and I think that’s what holds us. The vinaya, korwat, and how we’ve been trained by Luang Por and Ajahn Amaro really hold the foundations. But it’s not without challenges. Hopefully Luang Por will return in July and establish himself as the elder in residence. He’s still figuring out how to do that so that he gives the abbots the space they need — so that they still have that responsibility, but he’ll be around for giving talks, helping with the laypeople and with the monastics. He’ll be a steady presence to help shore things up.”

On Thai New Years, Songkran, held this year on April 14th, the monks and lay community will have the chance to bathe a Buddha image and the monastery elders’ hands in a traditional ceremony of reverence and renewal, gratitude for the year’s gifts and coming season. It will serve as a reminder that spring has again come to the mountain.