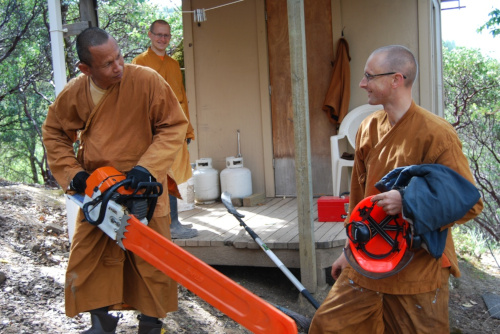 While the October fires that devasted the Redwood Valley area and nearly consumed the monastery brought profound loss to our neighbors, they also revealed the deep faith of the monastery’s community. In the months following the event, many friends of Abhayagiri expressed concern, offered basic requisites, and helped set up a fund for fire clearance and maintenance in years to come. Supporters in Thailand also expressed heartfelt concern and support upon meeting Luang Por Pasanno and other community members during their trip abroad this past January.

Encouraged by such well-wishing and acts of generosity, the community has begun this past month to expand on existing fire safety measures both in and around the property. Most mornings since the start of April, monks and lay guests have donned patched work jackets, thick gloves, and walked into the cold morning air to begin cutting and hauling dead wood from near monastery buildings. By enlarging defensible space around the monks’ kutis, Bhikkhu Commons, workshop, Casa Serena, and other structures, the community increases monastery structures’ chance of survival and firefighter safety in the event of another fire. The steadily growing piles of debris to be chipped and poison oak rashes ornamenting most monks’ ankles and wrists testify to many weeks of hard but inspired labor.

“The fire clearance looks better than ever before,” comments Tan Suhajjo after spending several days dragging potential fuel away from the small huts used by monastics, “and this means our kutis and buildings are better protected than they ever have been.”

While Abhayagiri’s community has poured itself into the work, the monastery has also enlisted other organizations to help with the large amount to be done. Funds donated by Abhayagiri’s friends and supporters in the months following the fire have helped hire the Student Conservation Association (SCA), which has spent the past four weeks cutting and clearing brush to expand defensible space around huts and buildings and widening trails to improve firefighter access to the property. Camping in the monastery, the SCA’s five members have been a nice addition to the community, joining the monks for the occasional meal and teatime.

While the bulk of fire clearance work should be finished by the the beginning of July, measures will continue to be taken now and in coming years to maintain and improve on what has been done. The community hopes that by caring for the monastery and its forest, they might in some measure honor the generosity and faith which has preserved Abhayagiri as a refuge for all those who wish to come and devote themselves to the Buddha’s path of liberation.