Later, during the morning meeting, Debbie shared additional information she had received from the county officials during the previous evening’s press conference. Debbie confirmed that firefighters had a significant presence throughout the Redwood Valley area including the monastery property. They had what were called “hard lines” of firefighters at various locations including the ridge on the monastery. Debbie also said that there were indications that the fire has gotten into the property, although specific details were still not available. Debbie told one of the fire chiefs that it was okay to let the cabins go if it was needed and she was told in response, “Whether it’s a million dollar house or a small cabin, they are all valuable to us.”

The morning meeting continued and people discussed the activities for the day, including holding a puja and Dhamma talk in the evening as well as preparing for Sunday’s Kathina. Students at the nearby Sudhana Center invited a few Abhayagiri monks for a meal offering. Ajahn Siripañño agreed to give another Dhamma talk to university students at the City of Ten Thousand Buddhas.

Luang Por Pasanno offered a reflection to the community and then the monastics chanted for Sondra and Dee who had lost their homes in the Redwood Valley fires. You can listen to the audio recording of the reflection and the chanting here:

People had the meal at 11am. People gathered to help with the cleaning at 2pm. Tea time was at 5pm. We were settling into a schedule again.

After tea, the community caravaned to the Sudhana Center which is about a 15 minute drive in Ukiah. From there, we listened to the official press conference for the Redwood Complex fire streaming over the Internet. The officials were confident that, if the conditions remained good throughout the night, they would be able to contain much of the fire and allow most people back into their homes and properties relatively soon. That said, it doesn’t appear that the Abhayagiri property is going to be included in the “soon” list, and additional details were not forthcoming. 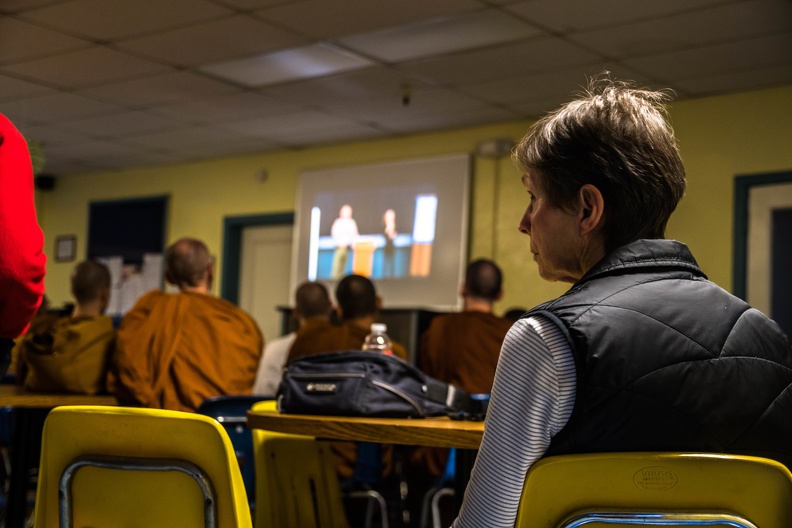 See more photos from the trip to the Sudhana Center.

People were happy to hear that one guest, who was with the community throughout evacuation, was able to retrieve her car that was left behind when the group evacuated north along Tomki Road.

After the press conference, we gathered for evening puja in the meditation hall inside the Sudhana Center. Luang Por gave a Dhamma talk on using the three refuges as a constistant reflection throughout our lives. We came back afterwards to the City of Ten Thousand Buddhas to retire for the evening.