On Friday, the community spent the day being of service. Some helped cook and clean in the City of Ten Thousand Buddhas. Several of the senior monks offered teachings to the university and boys high school students. Others went over to the Sudhana Center in Ukiah (an affiliated center of the City of Ten Thousand Buddhas) to help clean and move furniture.

Luang Por Pasanno, after hearing about the efforts during the day, gave an impromptu Dhamma talk during evening tea. He stressed the importance of continuing to practice in all situations and explained how forest monks have traditionally used cleaning and care of one’s requisites as a way of cultivating mindfulness and skillful attention. 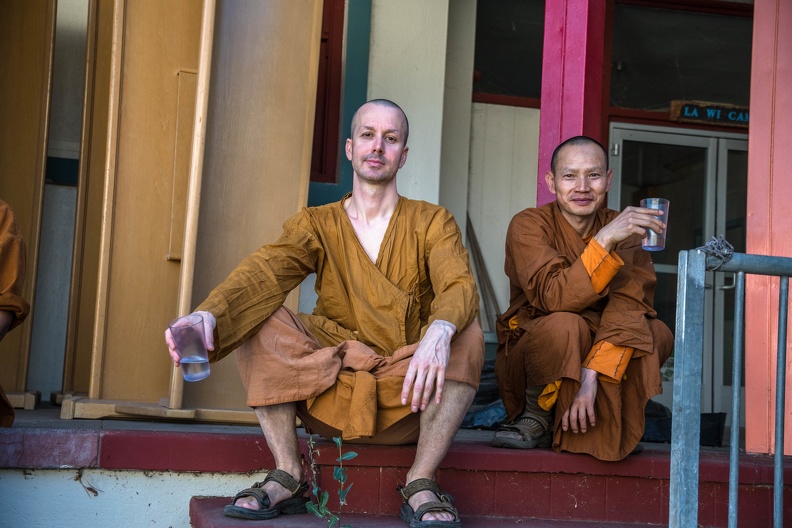 Lending a hand to CTTB

After evening tea, most of the community watched the Mendocino County Mendocino Sheriff and Fire meeting regarding the Redwood Complex fire streamed over the Internet.

The news from the meeting was cautious but hopeful. The burn area is currently 34,000 acres and only 20% contained. Most of that burn area still contains trees and tree roots that are still burning. That said, the past 36 hours provided very good weather conditions for the fire personel and a lot of work was accomplished throughout the affected area. Officials also reported that the number of firefighters went from 700 to 2,100 people during the last couple days. There was also a report of a 40% chance of rain next week around Wednesday.

There was only a little specific information regarding the monastery property as reported by the officials. Following the report, the community discussed the situation and people generally agreed that Abhayagiri’s major buildings are most likely still intact, although everything is still speculation. Significant fire control lines were reported to be in place in the area west of the monastery, as well as additional control lines in the “back” of the monastery (what we assume to be the north-eastern area) as well the area stretching into Potter Valley. The monastery’s Internet service provider also informed us that the the radio transmitter on the ridge and a radio at the Bhikkhu Commons was still in operation, which implies that at least these buildings have not been affected by the fire.

A couple news stories regarding the recent fires came to our attention that we thought to share with the wider community:

A lay man who has been with and assisting the community since the evacuation has been generously taking photographs during our stay at the City of Ten Thousand Buddhas. Here is another collection of photographs that he posted recently:

Settling in at CTTB