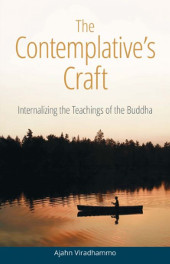 In celebration of this day, we would like to share Luang Por Viradhammo’s new book, entitled The Contemplative’s Craft: Internalizing the Teachings of the Buddha, which is now available in e-book formats:

Ajahn Viradhammo was born in Germany, 1947, to Latvian refugee parents. They moved to Toronto when he was four years old. Around 1969, while living in India, he encountered Buddhism, meeting the late Sāmanera Bodhesako, who introduced him to the teachings of the Buddha. He eventually travelled to Thailand to become a novice at Wat Mahathat in 1973 and took bhikkhu ordination the following year at Wat Pah Pong with Ajahn Chah. He was one of the first residents at Wat Pah Nanachat, the international monastery in north-east Thailand. Having spent four years in Thailand, he went back to Canada to visit his family in 1977. Instead of returning to Thailand, he was asked by Ajahn Chah to join Ajahn Sumedho at the Hampstead Vihāra in London. Later, he was involved in the establishment of both the Chithurst and Harnham monasteries in the UK. In 1985, invited by the Wellington Theravāda Buddhist Association, he moved to New Zealand, accompanied by Venerable Thanavaro, where he lived for 10 years, setting up Bodhinyānārāma monastery. In 1995 he came to the UK to assist Ajahn Sumedho at Amarāvati and stayed for four years before returning to New Zealand, where he lived until 2002. He was living in Ottawa caring for his mother for nine years and is now resident full time at Tisarana.