The monastic community begins the annual three month winter retreat on January 2nd. During this time, the resident community takes time to engage in more formal meditation practice following a changing schedule of group and individual practice. During these three months there will be no overnight guests accepted. (For overnight visits after the retreat please contact the monastery on April 1st.) However, day visitors and those wishing to visit the monastery to participate in the meal offering or bring offerings of requisites at the meal time are still welcome. It should be noted, however, that the community is practicing noble silence, and talking and conversations with the monastics and retreat crew are very limited. As per usual, the gene…
Posted December 31, 2019

2019 saw much development of the monastery infrastructure. In addition to repainting parts of the main cloister area and constructing and installing replacement bridges on our loop trail, various major projects were undertaken. Solar System Upgrade One of the most significant monastery infrastructure developments this year was an upgrade to the off-grid solar system in the upper part of the monastery. The batteries were replaced, a larger new inverter was installed and finally in November, the last major phase of this year’s upgrade was completed with the installation of 12 new solar panels. This solar system meets several purposes of the monastery. The upper part of the monastery is not connected to the PG & E electrical grid and connectin…
Posted December 6, 2019

It’s helpful to reflect on the reality of illness or discomfort that is natural and happens all the time. What comes to mind is the Buddha’s discourse on the two arrows. Being struck by one arrow is painful, and being struck by a second one is painful as well. In terms of feeling, because each of us has a body, it is quite natural that we experience unpleasant sensations. And due to having a mind, it is also natural that we are sensitive to the sense contacts we experience. These are qualities of the first arrow. Becoming averse, worried, or anxious about unpleasant feeling or planning and pro…

Ajahn Pasanno reflects on his trip to Thailand, the certainty of death, and freedom from craving for sensual pleasures. 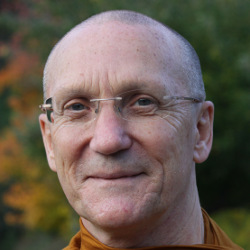