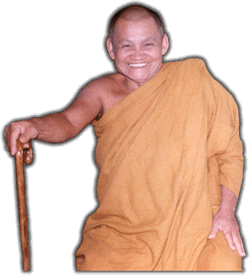 Ajahn Chah was born into a large, comfortable family in a rural village of northeast Thailand. In his early youth, he took samanera (novice monk) ordination and on reaching the age of twenty, he became a bhikkhu (a fully ordained Buddhist monk). In his early monastic life, Ajahn Chah studied Buddhist teachings and scriptures, but yearning for meditation guidance and dissatisfied with the slack standard of discipline at his monastery, he took on the life of a tudong or wandering monk. As a tudong monk, Ajahn Chah lived austerely in forests, caves and cremation grounds, and sought out the guidance of local meditation masters, including Ajahn Mun.

In 1954, after many years of practice without a permanent home, Ajahn Chah was invited to settle in a dense forest near his birth village. Over time, a large monastery called Wat Pah Pong was established there as monks, nuns, and laypeople came to hear Ajahn Chah’s teachings and train with him. His teachings and community contained elements commonly held throughout the Forest tradition, focusing on a simple, aesthetic, and rigorous lifestyle, discipline and moral conduct, meditation and contemplation, and a transformative inner experience rather than a reliance on scholarly knowledge. Although these Forest tradition elements were held in common, every Forest monastery and teacher also had their own flavor. In his teachings, Ajahn Chah placed an emphasis on community living and right view as essential aspects of the path to liberation.

Ajahn Chah was remarkable for his integrity, humor, and humanness; for his sense of surrender to spiritual practice and to the present moment; and for his ability to connect with people from many backgrounds in a spontaneous, straightforward, and joyous manner. He taught in a simple, yet profound style and emphasized practice in everyday life. As disciples gathered around Ajahn Chah, branch monasteries in his lineage also began to be established. Many new branch monasteries have continued to be established even after his death in 1992. At present there are more than three hundred Forest branch monasteries in Ajahn Chah’s lineage spread throughout Thailand and the world. Environmental conditions may cause the details of life amongst these many monasteries to vary somewhat; but in all of them, simplicity, heedfulness, and the strict adherence to monastic discipline support and encourage residents to live a pure life focused on the continuous cultivation of virtue, meditation, and wisdom.

Stillness Flowing, the English-language biography of Ajahn Chah, was released in 2018 to commemorate the hundred-year anniversary of his birth.